This is the second post to create an application using BDD and TDD in iOS. If you missed the first post, my recommendation is that you read it first here.

In this post we are going to walk through the process of designing how we are going to architecture it internally and start writing down the first specifications that later on will become tests. I decided to structure it the way a “non technical” person would describe what she wants and then move it to the world of Unit Testing and Acceptance Tests. 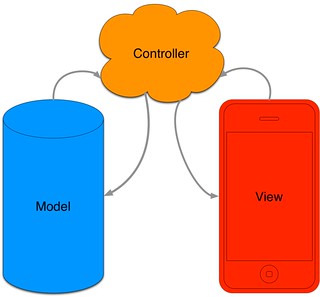 Let’s begin by revisiting the most important design pattern used in iOS Development, Model - View - Controller. The internal design we are going to implement follows the classic schema. The first decision to make here is where to put the logic. I’ve seen many designs that include the logic in the controller and leave the model just as a mere repository. My understanding is that the controller should act as the “where to take this” and “where to put that”, not as the container of “what happens when y put this” or “what should I obtain when I deliver this”.

So, here is the first decision, the logic of the game will live in the model. Let’s write some requirements the model has to follow.

These are the requirements to follow. As you can see I’ve simplified the mastermind rules in order to make this exercise more understandable. We are not trying to create the final app but to understand what are we doing.

Now that we have the model specified, let’s go for the behavior we want for the app. These requirements are written in natural language and then we’ll rewrite later on in gherkin sintax, which is the syntax used to describe the behavior that cucumber understands. As you will see, it is a very understandable syntax. Try to show the final result of the scenarios to a non technical person and see how easy she can understand and validate them, that’s the great advantage I find in this, it’s a bridge between devs and PO that both can understand and agree to a behavior with no interpretations and confusions.

Those could be the requirements. Note that we have to go to the very basic behavior to be sure nothing is left to no specification. If something is not explicitly defined, that means than nothing happens in that case.

Up to this point we have initial conditions. Let’s define the behavior to play.

The third group of specifications will be the behavior of the results and the reset of the game.

And this is all. We have created the specifications for all the rules and behaviors of the game. Of course we can define a lot more and be more exhaustive. But this is a good beginning.

In the next post BDD - Mastermind : TDD in the Model we’ll start implementing using TDD for the Model.